Edge detection for the ImageHorizonLibrary

(Note: instead of ImageHorizonLibrary I am using the acronym IHL.)

Basics: This is how the image recognition works

The Robot Framework library ImageHorizon is based on the Python module PyAutoGUI. With this module, mouse and keyboard can be automatically controlled on Linux, Mac and Windows. Thanks to the IHL, this technology can be used in Robot Framework tests, for example in end2end monitoring with Robotmk.

To ensure that the library knows where it should move the mouse pointer to (e.g., to complete a click), it must first search this target region with a so called reference picture.

Let’s take this dialog box as an example:

In order to press the button “Nicht speichern” (‘do not save’), the library needs to search for a reference image (nicht_speichern.png) which you have to create in the project folder:

Within the test, the IHL keyword Click Image (link) is used: the only argument it needs is the name of the reference image (without its extension):

Side note: In programming, images are represented as a matrix of numbers. These numbers describe the intensity of each pixel in the picture. In contrast to grayscale images (which have 1 value per pixel), RGB images are represented by a matrix of 3 values per pixel.
“Searching” a reference image in the haystack image is therefore the mathematical task to determine the coordinate of a (sub) matrix within another (bigger) matrix.

Small pixel deviations and their solution

The procedure described above works as long as the needle matrix exists exactly within the haystack.
Even one different RGB value (e.g. (233,40,22) instead of (233,41,22)) ends in an empty result. Game Over. Test FAILED.

“Deviation …” Hold on - either an application runs or it doesn’t. How should a deviation of individual pixels happen?"

At first glance the scenario of pixel deviations seems to be absurd: one would like to believe that the haystack images are completely predictable. This is why you should not rely on that:

I guess these were the problems which the authors of the ImageHorizonLibrary, Eficode, faced; anyway, the IHL provides an option called confidence (Keyword: Set Confidence). confidence is a value between 0 and 0.99 and describes how many percent of the needle image have to be contained in the haystack image.

confidence needs python-opencv to be installed.

The following picture shows the letter “a” in a picture with the dimensions of 10x10px: Let us assume that this letter should be recognized on the desktop and the picture above is now used as a reference image (needle).

The image will always be recognized.

Now we enable the font anti-aliasing in our operating system’s settings. It adds additional pixels (~20) to the original image: We have a bad suspicion: font smoothing! We lower the confidence value to 0.9. Only 90% of the needle image have to match now.

Again we lower confidence to 0.8 and - horray: IHL recognizes the letter again. The non-matching pixels are shown in the following image in yellow. That are 19 pixels of 100, which means we are just below the tolerance of 20%: Small pixel deviations can be catched by carefully lowering the confidence level.

Always make sure that the configuration of systems you are using for execution of End2End tests follows a strict scheme.

The danger of massive pixel deviations

All examples shown so far, with small pixel deviations, were executed with the image recognition method of ImageHorizonLibrary, which is based on pyautogui.

What about larger pixel deviations?

Even larger…? Come on.

Why confidence can fail

Let’s pick up the last example and assume that the letter should also be recognized when its background color changes. This happens for example when the mouse pointer “hovers” over a button. (Apart from that, this error cannot happen in web based tests done with Selenium or Playwright!)

Again, in yellow: the pixels which do not match with the reference image: 3/4 of the upper image is different from the original image below. Only 23% of the pixels match.

In purely arithmetical terms also a confidence value of 0.2 works (assuming that the haystack image is as small like that). But in practice, the haystack is always a full screen, where the algorithm will find dozens of matching regions!

I want to substantiate this case with an example from a customer project. Lession learned: don’t take anything as granted.

I had implemented a Robotmk End2End monitoring test for a highway management application.

During the integration phase, I discovered that the test which should check the proper loading of the map failed in 3-5% of the executions. The only error I got: Image not found.

Not seriously, I thought, conscientiously checking all the logs. But without any new finding.

And of course, I also fiddled around with confidence. :-) But it was painful to have no feedback about what the library exactly detected. The results got even worse.

In the course of my error search I expanded the test so that on every run it first took a partial screenshot (btw, a really cool feature of Screencap Library) of exactly the map region which should be checked.

and obviously, they seem to be fully identical, even when zooming in (don’t they?):

After some time, I compared the MD5 checksums of all those screenshots.

(Yes, of course: replacing those aged test VMs with fresh ones would probably have resolved the issue or at least provided more insights. But they would have taken too long to order….)

I then uploaded both images to an online image comparison service.

One and the same Map. Two images. (To avoid misinterpretations: the red pixels are the differences… ) OMG. Occasionally, the maps are indeed loaded in a different way from the map provider. Strongly magnified, you can divine a minimum change in brightness at some regions.

But… why? I won’t find out the solution to that question. I just learned something (again): when you are searching for the cause of an error, turn every stone…

Edge detection to the rescue

The brilliant idea came from colleague Frank Striegel (Noser Engineering AG, CH): needle and haystack have to be processed before the image comparison to remove all “ambient noise” (wherever it may come from).

Based on his prototype, I developed a custom keyword which pre-processes both images with the edge detection algorithm from the skimage framework for Python. The comparison is then done the on the resulting images. It worked pretty well.

Extending the ImageHorizonLibrary with skimage

Soon I rejected the idea to write a complete new library for that use case. IHL is such a great library and I had implemented a lot of tests with it. I simply like it because of its substructure (Pyautogui, that’s all). For comparison only: the SikuliXLibrary for Robot Framework requires Java (!) and a “JRobot Remote Server” (!!) in order to translate the Python Keywords into Java commands.

During the last weeks, Gautam Ilango and I intensively worked on an extension of the ImageHorizonLibrary. It offers the great possibility to use edge detection in End2End tests. Now we are close to send a pull request to Eficode - and we are very curious about their reponse! :-)

Canny edge detection in a nutshell

You can find a lot of information about the edge detection algorithm in the internet. We are using the so-called “Canny Edge Detection” algorithm (developed by John Francis Canny in 1986, brilliantly explained here. It consists of those five steps:

The effect of the sigma parameter in step 1 on the detected edges is shown on Wikipedia:

Our extended version of the IHL is fully compatible to the existing version. Using the “Strategy” design pattern I was able to make the adaption as less invasive as possible.

This means that if you import the IHL library as usual, it uses till the pyautogui module for image recognition:

Now let’s say that a needle image cannot be found in the haystack because of too much deviating pixels. In that case (and only then!) you have a reason to switch the strategy with the keyword Set Strategy:

From that moment on, all existing keywords of the IHL are using edge detection for image recognition. Both reference and screenshot image are reduced to their very relevant content (= the edges) bofore they are compared against.

In certain situations it possible that even after the edge detection the reference image can’t be found on the screenshot (e.g. when artifacts of RDP/Citrix compression resulted in a little different edge line).

But pixel deviations like this occur only along the edge line, thus they are relevant imageinformation. In this case, a smaller confidence level of 0.9 for example is sufficient to get a robust image detection even in this case.

If this were it all, the IHL would have “another” recognition strategy which “somehow works better”, but you wouldn’t still know why.

To be able to fine-tune confidence in both strategies (and others in skimage), a new keyword Debug Image was created. Simply use it right before the line in a Robot test where the recognition of a reference image is unwilling to work:

After the suite restart, the test will pause at the problematic position and open the ImageHorizon-Debugger-GUI, which was crafted by Gautam Ilango.

The debugger allows to select the needle image from the reference_folder:

Below of that there are two sections for both strategies with a button Detect reference image and a handful of sliders for different parameters: 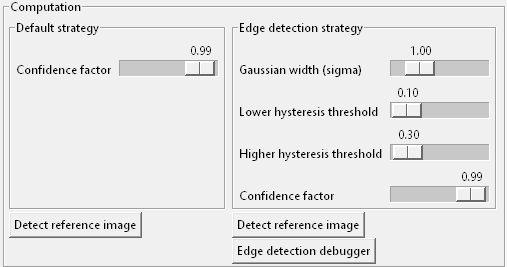 When you click this button the debugger will try to detect the reference image with the according strategy on the current desktop. It will do it exactly like during a keyword execution like Wait For.

The viewer in the lower area of the window shows the needle image and, left of that, a thumbnail image of the current haystack image with all matching regions: 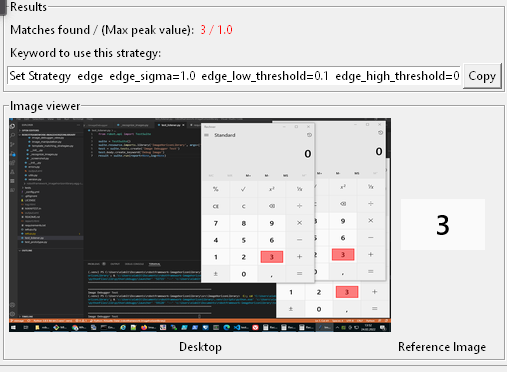 The debugger UI gives you answers to two important questions:

As soon as you are satisfied with the settings, you can copy/paste the keyword Set Strategy into the Robot test file.

After the click on “Edge detection debugger” things get really interesting: it opens another window which shows needle and haystack images before and after the edge detection. The viewer also allows to zoom into the images in order to inspect the regions: 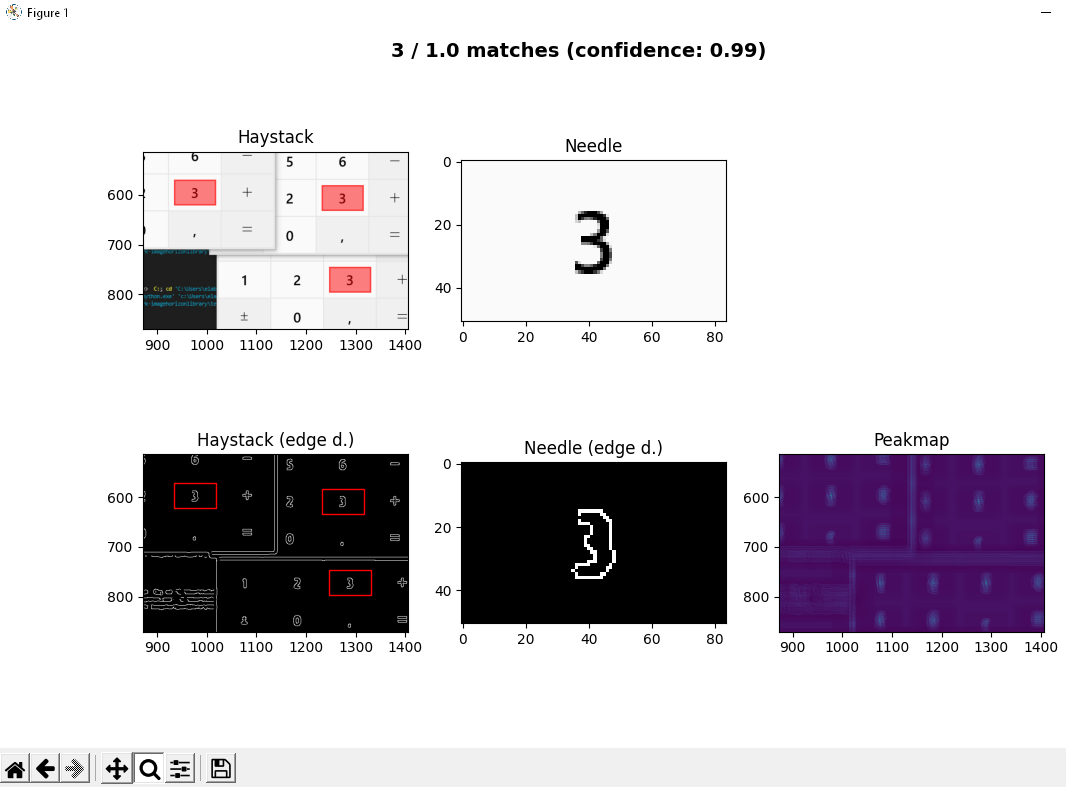 Thanks to this visual feedback, confidence (and in case of skimage also sigma, low_threshold and high_threshold) can now be adjusted in a way that preferably only one single match can be achieved.

“Matches” are only counted if the found area contains more similar pixels than set by confidence. Even if you see more than one match while debugging, the strategy always returns only the coordinates of the best match during test execution.

Our extension to the ImageHorizonLibrary makes application tests possible even if the haystack image was “optimized” or “falsified” (this is in the eye of the beholder…) due to image compression, font smoothing etc., or even if content from external sources cannot be taken as predictable (as shown in the example of the highway operator application).

Apropos, this is how the swiss national map looks like after edge detection (the yellow dashed line shows the dimensions of the reference image): 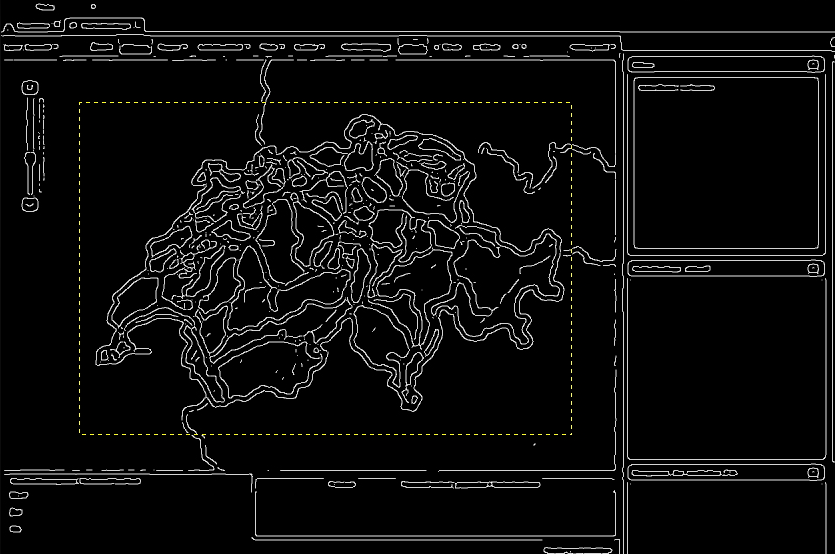 We (Gautam and me) are very proud about this further development which we have presented to Eficode as a pull request on Github.

Until the pull request gets accepted, you can try out the current state of the edge detection strategy as follows:

Thanks to ABRAXAS Informatik AG

And again, a million thanks to ABRAXAS Informatik AG (CH) for the excellent collaboration, your candour for Open Source Software and last but not least the financial resources, which made all this possible.